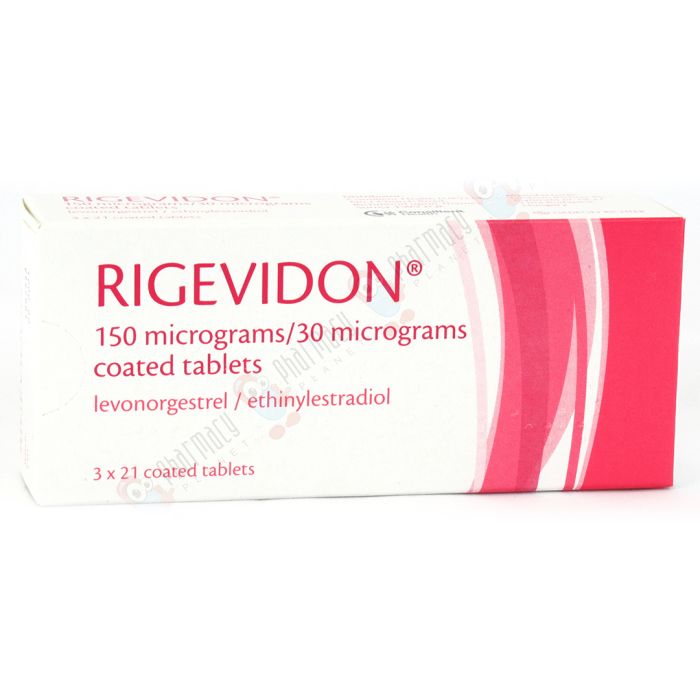 Rigevidon is an oral contraceptive. When used correctly, it will provide near 100% protection against pregnancy. Its two active ingredients, levonorgestrel and ethinylestradiol, prevent ovulation from occurring during the menstrual cycle. Rigevidon is a monophasic combined pill, meaning each pill contains the same dose of levonorgestrel and ethinylestradiol. If you have been prescribed Rigevidon, repeat supplies can be purchased online from the Pharmacy Planet. Rigevidon may reduce acne, and protect against conditions such as fibroids, ovarian cysts and pelvic inflammatory disease. It will not protect against sexually transmitted infections. There are 21 Rigevidon pills in a pack. Once you have finished a pack, you will stop taking the pill for seven days. During this time you will have a normal bleed. Once seven days have passed, begin your next cycle of treatment.

Rigevidon is a combined oral contraceptive, also called a birth control pill. It contains two types of female hormones: an estrogen, ethinyl estradiol, and a progestogen, levonorgestrel at a low dose. The combined birth control pill prevents you from getting pregnant in three ways. These hormones make the ovary not release an egg every month (ovulation), They also thicken the fluid (in the cervix) making it more difficult for sperm to reach the egg. They also alter the lining of the uterus to make it less likely to accept the fertilized egg.

The Rigevidon pill contains progestogen (levonorgestrel) and an estrogen (ethinyl estradiol). This mixture interferes with fertilization because it inhibits the pituitary secretion of gonadotropic hormones by binding to the corresponding nuclear receptors: PR A and PR B receptors in the case of progestogen and ER-alpha receptor for estrogen. This activity leads to the inhibition of follicular maturation and suppresses ovulatory cycles in a high percentage. Furthermore, the mixture causes endometrial changes that interfere with the nesting process and induces the formation of viscous and impenetrable cervical mucus that interferes with the migration of sperm from the vagina to the uterine and tubal cavities. The combined effect of these actions determines their contraceptive efficacy, which reaches up to 99%. The metabolism is hepatic and its elimination is through urine and faeces for both active ingredients and their metabolites. Restoration of ovarian function occurs within three months after stopping treatment.

Rigevidon is a contraceptive treatment distributed by Consilient. It is a combined hormonal contraceptive pill that contains synthetic versions of the hormones progesterone and estrogen. These synthetic hormones in the pill work by persuading the body to give up its usual pregnancy preparations.

Follow your doctor's instructions when taking this pill. This will help you achieve maximum effectiveness and limit the risk of side effects.

Like all medicines, Rigevidon can cause side effects, although not everybody gets them.

These side effects have been reported in women taking oral contraceptives, which may appear in the first months after starting Rigevidon, but they usually disappear once their body has become accustomed to the contraceptive.