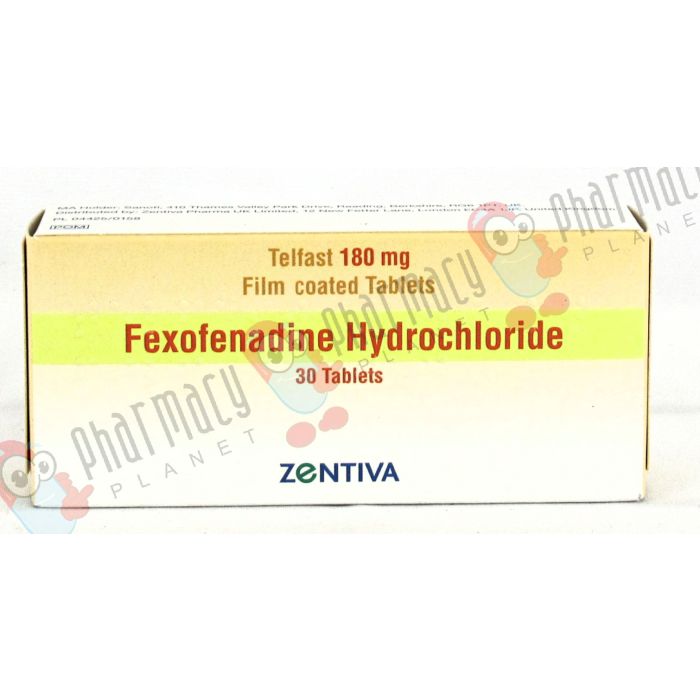 Fexofenadine tablets provide quick and effective relief from the symptoms of allergic rhinitis. These symptoms include; sneezing, congestion, and a runny nose. It has proven an effective treatment for pollen allergies (hay fever), as well as allergies to common household irritants, such as dust mites and pet dander.

Allergic rhinitis is a very common condition and is caused by an overly sensitive immune system. When a harmless allergen, such as pollen, enters the nose, the immune system mistakenly reacts to it, believing it to be something more serious, such as an infection. To protect against this supposed infection, the body will start to produce more mucus, which will lead to nasal congestion and sneezing. For some people, these symptoms are only experienced during the high pollen season. This form of rhinitis is known as hay fever, or seasonal rhinitis. For other allergy sufferers, where the symptoms are triggered by household irritants, such as dust mites and animal dander, the symptoms can be experienced all year round.

If additional allergy relief is needed, Fexofenadine tablets can be taken alongside a nasal spray or eye drops. Fexofenadine is generally a non-drowsy antihistamine, but may cause drowsiness in some people. For this reason, it is advised to take care if driving or operating machinery whilst taking it.

What is Fexofenadine Telfast?

Fexofenadine Telfast is a non-drowsy antihistamine medication used for seasonal allergic rhinitis (hay fever) and chronic urticaria (hives). Hay fever is caused by the exposure to pollen against which some of the immune systems are vulnerable and hence causes allergic reactions. These reactions are the result of pollen infiltrate into histamine - a chemical released by the cells in the lining of eyes and nose.

The Histamine then begins to cause swelling and inflammation, which induces spells of sneezing and runny or clogged nose. It can also result in eye inflammation, redness, or itching known as allergic conjunctivitis.

The condition where one has a severely itchy skin with prominent rashes is called Urticaria. There can be various factors causing the rash including allergies or a specific medical condition. However, when the cause cannot be diagnosed, and the rashes sustain for longer than six weeks, it is considered as chronic urticaria.

Fexofenadine is an antihistamine medicine given to prevent the effect of histamine so that the allergic symptoms could be reduced. In addition to that, the medicine is also used to treat symptoms of rashes, which are termed as chronic urticaria.

How Does Fexofenadine Work?

Histamine is a chemical that is discharged by mast cells when triggered by an allergen. The chemical causes numerable allergic reactions, for example, soaring the mucous membranes, continuous sneezing, and itchy nose and eyes blocked nose etc. Fexofenadine restricts histamine receptors to react to the pollen particles and hence restrains and reduces the symptoms of an allergic reaction.

What Are the Benefits of Taking Fexofenadine?

Hay fever isn’t considered as a serious threat, however, if it is left untreated or if the intensity increases, it can have crucial effects on health - reducing the quality of life. Hay fever when gone bad also transforms into inflammation of the sinuses (sinusitis). A middle ear infection called otitis media can also be an unfortunate effect of extreme hay fever in children.

How Do I Use Fexofenadine?

Fexofenadine is mostly taken only on the day on which the individual is suffering through allergic symptoms due to hay fever or some other respiratory allergies. Fexofenadine can also be prescribed for daily use in case of seasonal allergies. For example, the doctor may suggest you to take the tablet daily in summer or spring to stop hay fever.

It is highly advised to not take a higher dose of Fexofenadine than what is recommend by the doctor. According to a general overview, adults suffering from hay fever can take 120 mg once a day. Children with seasonal allergic rhinitis should be given a comparatively lower dosage i.e. 30 mg.

If the symptoms are severe, then two 30 mg tablets twice a day can be given with a considerable gap. To treat chronic urticaria in adults the dose may vary as per the severity and can go as high as 180 mg once a day. Over-dosage may lead to adverse effects and reactions, as indicated below.

Fexofenadine Precautions and Side Effects

Side effects of the Fexofenadine rarely occur and in most of the cases, are relatively mild and tolerable. However, it is better to consult a doctor if one suffers from severity of any of the side effects such as skin rash, an infection due to a virus, backache, dizziness, drowsiness, dry mouth, headache, indigestion, inflammation of the tissue lining the sinuses, low energy, muscle pain, nausea, pain with menstruation, throat irritation, vomiting.

It should be used with caution by patients with a medical history of angioedema, high blood levels of potassium, kidney disease or dialysis, salt restrictive diet, liver disease or any related allergy.

The medication may contain some inactive ingredients, which may react if one has certain medical problems. Therefore if one has a medical history of kidney disease, diabetes, phenylketonuria (PKU), or any other condition that requires you to limit/avoid these substances in your diet - it is highly recommended to avoid the usage of Fexofenadine if not prescribed by the doctor.

High-risk groups for the drug are pregnant females who must only be prescribed this medication if the benefits outweigh the risks and only during the first three months of pregnancy.

Fexofenadine is indicated for the treatment of

How Do I Buy Fexofenadine Online?

You can buy Fexofenadine online in the UK from this [website]. You only need to fill out your subscription form and your order will be processed for quick shipment. It should be noted that only prescribed dosage should be consumed to ensure prevention from any harmful effects.