Rhinocort Aqueous nasal spray contains budesonide, which belongs to a group of medicines called glucocorticoids, and is used to reduce ...

Rhinocort Aqueous nasal spray contains budesonide, which belongs to a group of medicines called glucocorticoids, and is used to reduce inflammation. Rhinocort aqua reduces inflammation of the nasal mucosa (inner part of the nose). Rhinocort aqua suspension for the nasal spray is indicated for the relief of symptoms of allergic rhinitis caused by allergy to pollen and other allergens present in the air such as dust mites, fungal spores or animal hair, in adults. 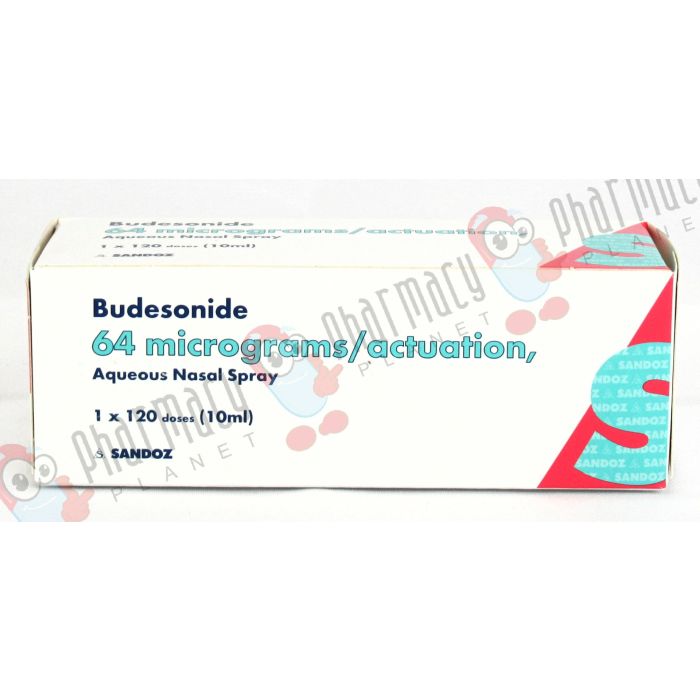 The condition is caused by allergens, which trigger an immune response within the body. The most common allergens that trigger allergic rhinitis are; pollen, animal fur, and dust mites. After an allergen enters the nose, the immune system mistakes it for something more dangerous, such as an infection. This case of mistaken identity triggers an immune response, which results in the body producing additional mucus. This leads to sneezing, congestion, and a runny nose.

Rhinocort will likely take a few days to reach its full effect. So, if possible, begin treatment in advance of when you expect to encounter allergens. You may choose to use oral antihistamines for relief until Rhinocort begins to reduce inflammation. Rhinocort has been proven to be safe and effective for long-term use.

What is Rhinocort Aqueous/Budesonide Nasal Spray?

Rhinocort Aqueous nasal spray budesonide, which belongs to a group of medicines called glucocorticoids, and is used to reduce inflammation. Rhinocort aqua reduces inflammation of the nasal mucosa (inner part of the nose).

Rhinocort aqua is used for the symptomatic relief of allergic rhinitis caused by pollen and other airborne allergens, such as dust mites, fungal spores, or animal hair, in adults. Relieves symptoms such as sneezing, itching, stuffy nose, runny nose.

The maximum level of protection may not be reached during the first few days, so it is important to continue regular use to ensure full therapeutic benefit. A doctor should be consulted if symptoms do not improve or worsen after 7 days. This medicine should not be used continuously for more than 3 months unless your doctor tells you to.

The exact mechanism of action of glucocorticoids in the treatment of rhinitis is not known. Anti-inflammatory activities, such as inhibition of inflammatory mediator release and inhibition of cytokine-mediated immune responses, are likely important. The intrinsic potency of budesonide, measured as the glucocorticoid receptor affinity, is approximately 15 times greater than that of prednisolone.

Rhinocort aqua suspension for the nasal spray is indicated for the relief of symptoms of allergic rhinitis caused by allergy to pollen and other allergens present in the air such as dust mites, fungal spores or animal hair, in adults

The initial recommended daily dose is two sprays in each nostril.

How to use the nasal spray

Once complete relief of symptoms is achieved, administration to one application in each nostril can be reduced once daily, preferably in the morning.

Do not manage more than four applications in a day.

You should see a doctor or pharmacist if it gets worse or does not improve after 7 days.

Do not use it continuously for more than 3 months.

You may notice relief of symptoms from the first day of treatment, however, it may take several days of treatment for the full effect to occur (sometimes up to 2 weeks).e it and its dosage?

If you experience any of the following ailments, stop using this nasal spray and immediately consult a doctor:

Sudden signs of an allergic reaction such as a rash, itching, hives or redness of the skin, swelling of the face, lips, mouth, tongue or other parts of the body, difficulty breathing, wheezing or difficulty swallowing or breathing, or feeling Fainting.

Other side effects of which the frequency is not known to include:

There have been no cases of interaction between budesonide and the drugs used in the treatment of rhinitis.

Budesonide metabolism is mainly mediated by CYP3A4. Concomitant treatment with CYP3A inhibitors, such as itraconazole, ketoconazole, clarithromycin, HIV protease inhibitors such as saquinavir, nelfinavir, indinavir, atazanavir, ritonavir, and cobicistat-containing medicinal products, is expected to increase the risk of systemic adverse reactions. The combination of budesonide with CYP3A4 inhibitors should be avoided unless the benefit outweighs the increased risk of corticosteroid-related systemic adverse reactions, in which case patients need to be followed up for systemic corticosteroid reactions. Concomitant short-term use (1 to 2 weeks) of ketoconazole with budesonide is not associated with a clinically significant pharmacological interaction.

In women who are concomitantly receiving estrogen and contraceptive steroids, an increase in plasma concentrations and the effect of corticosteroids have been observed. However, this effect is not observed at low doses of combined oral contraceptives.

It should be borne in mind that, since adrenal function may be inhibited, performing the stimulus test with ACTH for the diagnosis of pituitary insufficiency could result in false values ​​(lower than the real ones).

You can buy Rhinocort nasal spray online through one of the UK’s leading online pharmacies, Pharmacy Planet. It's easy and convenient. You will need to fill out a short assessment and the item will be delivered directly to your door. If you want to buy this Budesonide Nasal Spray Online, use Pharmacy Planet, a UK pharmacy you can trust.