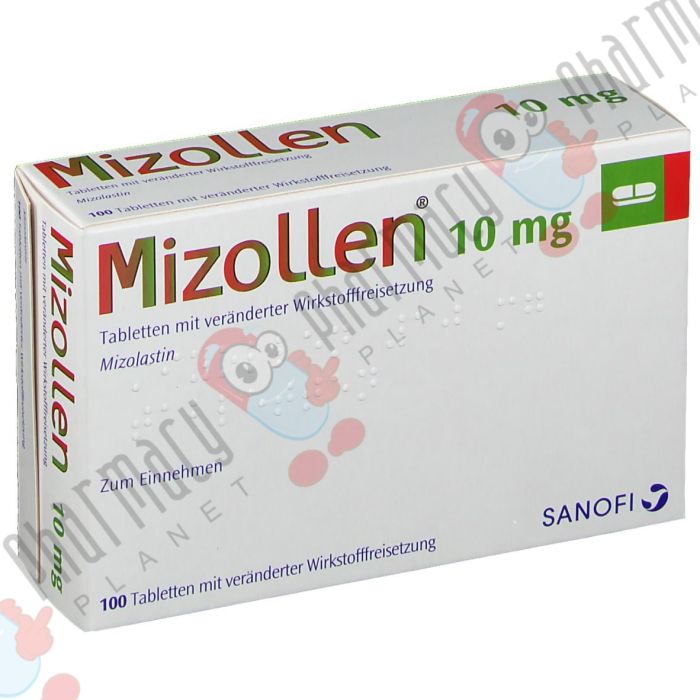 Exposure to substances like dust, animal fur and pollen can cause allergic reactions, which can be extremely inconvenient. Unlike majority anti-allergic medication, Mizollen is a non-sedating medication. Mizollen is also used to treat symptoms of Utacaria, in which skin develops an itchy rash, usually triggered when an allergen meets the skin.

Mizollen contains Mizolastine as its active ingredient. It is a non-sedating and a fast acting anti-histamine. Histamine is a substance that is released when cells detect something harmful. It binds to specific receptors present in some cells all over the body called the H1 receptors. After binding to these receptors, histamine triggers various allergic reactions. The secretion triggers expanding of blood vessels, swelling and inflammation and contraction of certain smooth muscles.

Cells in the lining of your nose release histamine when they come in contact with an allergen. This causes multiple allergic reactions like sneezing, runny nose and congestion. Antihistamines do not stop the secretion of histamine. They only prevent it from binding to the H1 receptors stopping the allergic reaction.

What Are the Benefits of Using Mizollen?

Mizollen is an antihistamine that prevents allergic reactions and symptoms associated with it. Following are the benefits of using Mizollen:

How Do I Take Mizollen?

Mizollen should be taken exactly as directed by your doctor. If you are not sure how to take your medication, ask your doctor or your pharmacist.

The usual dosage for adult, children above 12 years and the elderly is one 10mg tablet daily. If the dosage prescribed by your doctor differs from the one mentioned here, do not change it without consulting your doctor first.

Mizollen has fairly mild and tolerable side effects. Most people do not experience any side effects when taking this medicine. Some common side effects are dry mouth, indigestion, headache, dizziness, drowsiness, lack of energy, diarrhea, nausea and increased appetite with weight gain.

Rare side effects of Mizollen include irregular heartbeats, anxiety, depression, low blood pressure, joints and muscle pain. Talk to your doctor if the side effects get worse or do not go away. Also, be careful of the possible side effects that are not mentioned here.

How Do I Buy Mizollen Online?

You can order Mizollen online in the UK from [this website] after filling a prescription form. Never take more than the prescribed dose. If you suspect that, you have overdosed, contact your doctor or go to the hospital immediately.