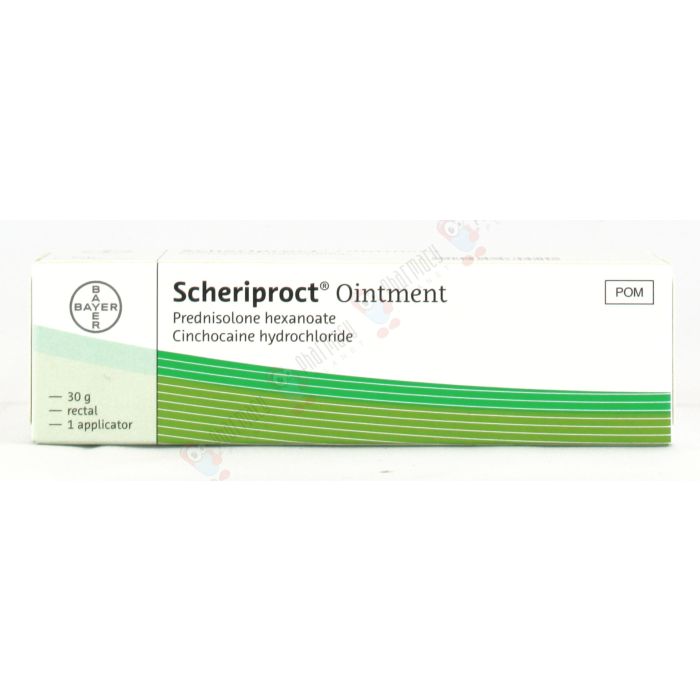 Cinchocaine belongs to a group of medicines called local anaesthetics. These medicines work by blocking the pain messages along the nerve fibers. This prevents the pain signals from reaching the brain, creating a numbing sensation in the area where the ointment has been absorbed. When treating piles, using a local anaesthetic such as Cinchocaine will numb the affected area, reducing the pain and itching associated with haemorrhoids.

The other active ingredient, Prednisolone belongs to a category of medicines known as; Corticosteroids. These medicines work to relieve pain and inflammation. Inflammation is caused by an immune response that causes blood vessels to dilate (widen), resulting in the affected area becoming red, painful, itchy and swollen. Prednisolone works from within the cell. It actively reduces the substances produced by the body that trigger the inflammation. When Prednisolone is used to treat Haemorrhoids, it will effectively reduce the painful inflammation and swelling caused by this condition.

Scheriproct is a combination medication that contains two active medications: prednisolone hexanoate, which is a glucocorticoid steroid and reduces inflammation, and cinchocaine hydrochloride, an anesthetic that works locally to relieve pain. These scheriproct ointment uses include being utilised to relieve inflammation (that is, swelling, redness, itching, and pain) caused by hemorrhoids (also known as piles) and itching in your anus.

Scheriproct ointment contains the active ingredients Cinchocaine and Prednisolone, which together relieve the uncomfortable symptoms caused by hemorrhoids. Cinchocaine acts as a local anesthetic numbs the affected area, and consequently relieves pain and irritation. Prednisolone is an effective steroid and reduces inflammation of hemorrhoids, preventing swelling and itching.

Scheriproct is a treatment for hemorrhoids. It contains two active ingredients, which work by relieving pain and reducing inflammation in the affected area. The treatment is available in our pharmacy as an ointment. In most cases, the ointment is applied twice a day. However, in the first days of treatment, your doctor may recommend increasing the amount to control symptoms as quickly as possible.

It is very important that you wash your hands after using the treatment. You should also wash and dry the affected area before applying the treatment. You should apply the ointment for external or internal use on the affected area for five to seven days (three to four times on the first day, if necessary). After the symptoms disappear, you should apply the ointment once a day for a few days.

If the doctor does not prescribe otherwise, in general, the ointment will be applied 3 times a day, with the exception of the first day of treatment, in which to get a quick elimination of discomfort, you can use the ointment up to 4 times.

For intrarectal application, the cannula included in the package will be used, screwing it onto the

ointment. Before very inflamed and painful processes, it may be advisable to use your finger as well for intrarectal application. Prolapsed nodules should be covered with a thick layer of ointment and, if possible, very carefully try to replace it with your finger. If the nodules external are very inflamed, it is recommended to take a sitz bath before applying the preparation

Like all medicines, This haemorrhoid treatment cream can cause side effects, although not everyone will suffer from them.

Pregnancy and lactation: Experimental clinical trials in animals with glucocorticoids have shown reproductive toxicity. A series of epidemiological studies suggest that there may possibly be an increased risk of cleft lip and palate in newborn infants of women who were treated with systemic glucocorticoids during the first trimester of pregnancy. There is insufficient information regarding the use of topical glucocorticoids during pregnancy; however, a lower risk can be expected, since the systemic availability of topically applied glucocorticoids is very low. As a general rule, topical preparations containing corticosteroids should not be applied during the first trimester of pregnancy. The clinical indication for Scheriproct treatment should be carefully considered and the risk-benefit ratio in pregnant and lactating women should be carefully assessed. In particular, prolonged treatment should be avoided. Excretion with milk of effective amounts of active glucocorticoids is unlikely.