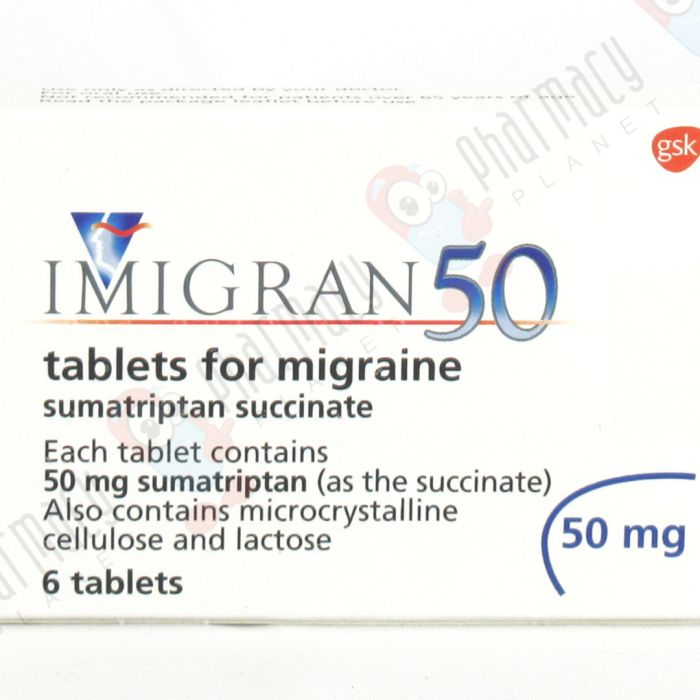 Sumatriptan also stabilises some of the chemical changes that occur in the brain during a migraine attack. The active ingredient is sumatriptan succinate.

Sumatriptan (generic Imigran) usually starts to work after 30 minutes, therefore it is important to take it as soon as possible after a migraine has started. Sumatriptan may not work for everyone; where it does not work, alternative triptans — such as almotriptan (Almogran) and frovatriptan (Migard) are worth trying.

Sumatriptan is a headache medicine that narrows the blood vessels around the brain. Sumatriptan also reduces substances in the body that can cause headache, nausea, sensitivity to light and sound, and other symptoms of migraine.

Sumatriptan represents a new advance in the treatment of migraine. This drug has no analgesic effects and its development was based on the observation of changes in serotonin levels that are parallel to migraine attacks. Thus, it was observed that platelet serotonin increased before an attack and decreased during it. Furthermore, experimental depletion of serotonin levels induced typical migraine headaches.

Numerous serotonin receptors (5-HT receptors) are known, of which subtypes 1B and 1D have been identified, which are abundant in the cranial arteries of dogs and primates, in human cerebral arteries as well as in the vasculature of the dura mater. The effect of sumatriptan is selective vasoconstriction of the dilated and inflamed cranial vessels of the carotid circulation. Animal studies have shown that sumatriptan selectively reduces carotid blood flow, affecting blood pressure only very slightly, since its effects on peripheral resistance are null or very small. The 5-HT 1 receptors in which sumatriptan acts as a ligand are believed to be presynaptic. In general, stimulation of presynaptic receptors (or autoreceptors) triggers negative feedback, reducing the release of the neurotransmitter controlled by that receptor. In other words, the binding of sumatriptan to the 5-HT1 receptor reduces the release of serotonin and also that of other vasoactive neuropeptides in the perivascular axons of the dura. This mechanism of action is confirmed by the fact that fluoxetine (a drug that enhances synaptic serotonin concentrations), reduces the clinical efficacy of sumatriptan.

This Migraine medication is a pain reliever that belongs to the group of antimigraine preparations. The active substance in Sumatriptan UR is sumatriptan, a 5HT1 receptor agonist. Migraine-type migraines are the result of the expansion of blood vessels. Sumatriptan constricts these blood vessels, thus alleviating migraine-type migraines. Sumatriptan UR is used to treat migraine attacks with or without aura (a warning sensation that generally includes visual disturbances, such as light flashes, zigzag lines, stars, or waves).

Sumatriptan should not be taken as a preventive treatment, as it is indicated for the treatment of acute migraine attacks. Sumatriptan UR 50 mg should be taken as soon as possible after migraine headache appears, however, it is also effective when taken at some other stage of the attack.

The recommended dose for adults is 50 mg. 100 mg may be required for some patients. If Sumatriptan UR does not relieve your symptoms immediately, you will not benefit from taking another dose for the same attack. You will be able to take Sumatriptan UR for the next attack. If the migraine disappears after the first dose, but then symptoms return, you can take another tablet as long as at least two hours have passed since you took the first tablet.

Swallow the tablets whole with a little water.

Sumatriptan is not recommended for use in children, adolescents, and patients over 65 years of age. Low doses of 25-50 mg should be considered for patients with mild to moderate hepatic impairment.

Like all medicines, this medicine can cause side effects, although not everybody gets them. Contact your doctor if you need to discuss them.

You can buy Sumatriptan Tablets online through one of the UK’s leading online pharmacies, Pharmacy Planet. It's easy and convenient. You will need to fill out a short assessment and the item will be delivered directly to your door. If you want to buy this migraine treatment medication online, use Pharmacy Planet, a UK pharmacy you can trust.