Trelegy Ellipta is used to treat chronic obstructive pulmonary disease (COPD) in adults. COPD is a chronic disease that gets ...

Trelegy Ellipta is used to treat chronic obstructive pulmonary disease (COPD) in adults. COPD is a chronic disease that gets worse slowly and is characterized by causing shortness of breath. In COPD, the muscles around the airways contract, making it difficult to breathe. This medication extends the muscles of the lungs, reducing swelling and irritation in the smallest airways and facilitating the entry and exit of air from the lungs. When used regularly, it helps control breathing difficulties and reduces the effects of COPD in your daily life. Trelegy Ellipta should be used daily and not just when you have trouble breathing or other symptoms of COPD. It should not be used to relieve a sudden attack of choking or wheezing. If you have these types of attacks you should use a quick-acting inhaler (such as salbutamol). 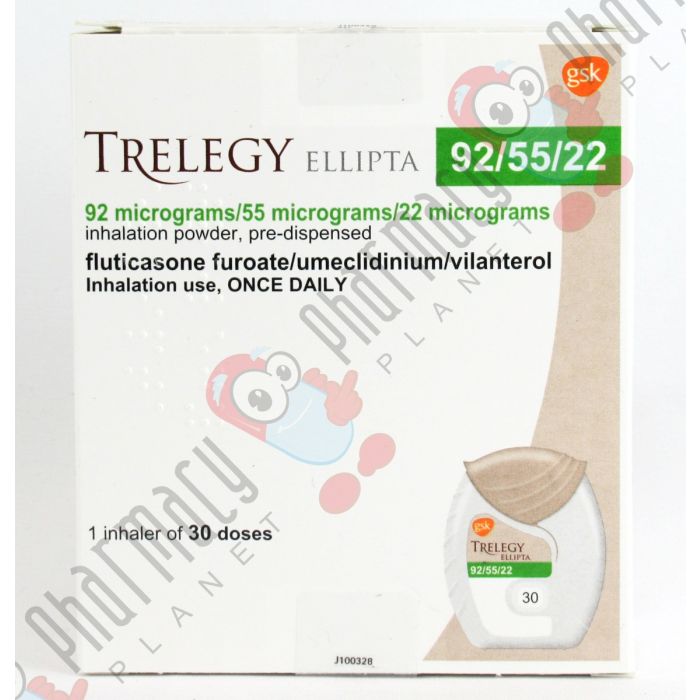 Trelegy Ellipta is used to treat chronic obstructive pulmonary disease (COPD) in adults. COPD is a chronic disease that gets worse slowly and is characterized by causing shortness of breath. In COPD, the muscles around the airways contract, making it difficult to breathe.

Fluticasone furoate is a corticosteroid with potent anti-inflammatory activity. The exact mechanism by which fluticasone furoate acts on COPD symptoms is unknown. Corticosteroids have been shown to have a wide variety of action on multiple cell types (eg, eosinophils, macrophages, lymphocytes) and on mediators involved in inflammation (eg, cytokines and chemokines).

Umeclidinium is a long-acting muscarinic receptor antagonist (also known as an anticholinergic). Umeclidinium exerts its bronchodilator activity by competitively inhibiting the binding of acetylcholine to the muscarinic receptors of the bronchial smooth muscle. In pre-clinical studies, it is shown to have slow reversibility in vitro in human M3 muscarinic receptor subtypes and a long duration of action in vivo when administered directly to the lungs.

Vilanterol is a selective long-acting beta2-adrenergic agonist (LABA). The pharmacological effect of beta2-adrenergic agonist drugs, including vilanterol, are at least in part attributable to stimulation of intracellular adenylate cyclase, the enzyme that catalyzes the transformation of adenosine triphosphate (ATP) to adenosine monophosphate - 3 ', 5 'cyclical (cyclic AMP). The increase in cyclic AMP levels causes relaxation of the bronchial smooth muscle and inhibition of the release of mediators of immediate hypersensitivity of cells, especially mast cells.

How to use Tregely Ellipta and its dosage?

Always use this medicine exactly as your doctor has told you. If in doubt, consult your doctor or pharmacist again.

The recommended dose is one inhalation every day, at the same time each day. You only need one inhalation a day, as the effect of this medicine lasts for 24 hours.

Do not use more doses than your doctor has told you.

It is very important that you use Trelegy Ellipta every day, as your doctor has told you. This will help you to have no symptoms throughout the day and night.

Trelegy Ellipta should not be used to relieve a sudden attack of choking or wheezing. If you have this type of attack, you should use a quick-acting "rescue" inhaler (such as salbutamol).

How to use the inhaler

Trelegy Ellipta is ready for use once the tray is opened.

If your breathing or wheezing worsens immediately after using this medicine, stop using it and seek medical help immediately.

If you experience any of the symptoms listed below while using Trelegy Ellipta, consult your doctor. They could be symptoms of a lung infection:

Frequent side effects, they can affect up to 1 in 10 people:

Uncommon side effects, they can affect up to 1 in 100 people:

Fluticasone furoate and vilanterol both undergo rapid clearance due to intense first-pass metabolism mediated by the liver enzyme CYP3A4.

Caution is advised when administering this medicinal product together with potent CYP3A4 inhibitors (eg ketoconazole, ritonavir, cobicistat-containing medicinal products), as increased systemic exposure of both fluticasone furoate and vilanterol is possible, resulting in May cause a potential increase in adverse reactions.

You can buy Trelegy Ellipta online through one of the UK’s leading online pharmacies, Pharmacy Planet. It's easy and convenient. You will need to fill out a short assessment and the item will be delivered directly to your door. If you want to buy this Asthma treatment medication online, use Pharmacy Planet, a UK pharmacy you can trust.