Tanatril is indicated in the treatment of high blood pressure (hypertension). Tanatril belongs to a group of medicines called ACE ... 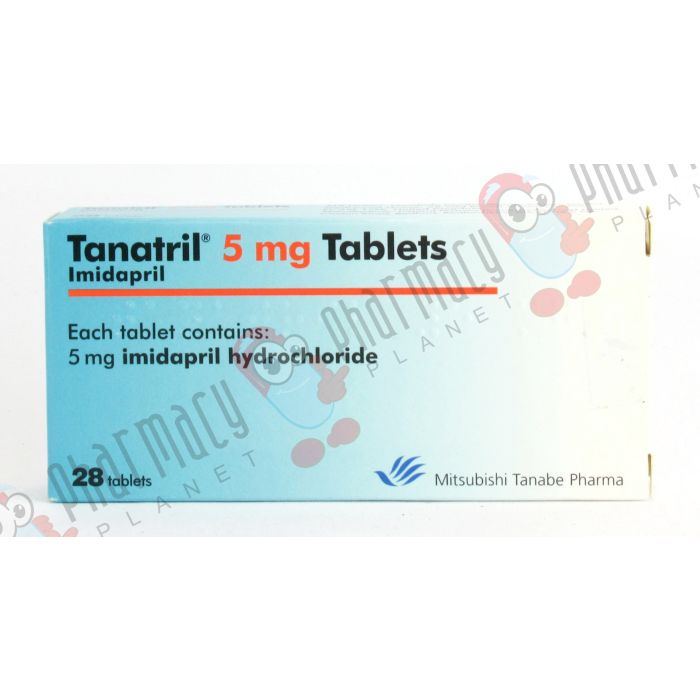 Tanatril is indicated in the treatment of high blood pressure (hypertension). Tanatril belongs to a group of medicines called ACE inhibitors (an enzyme that converts angiotensin).

Tanatril comes in packs of 14 or 28 tablets. Each tablet contains imidapril hydrochloride. This Hypertension Medication belongs to a group of medicines called ACE inhibitors (angiotensin-converting enzyme), that is, medicines that lower blood pressure. Tanatril is indicated in the treatment of high blood pressure.

This high blood pressure medication works thanks to its main active ingredient, Imidapril. The hypotensive effect of imidapril on hypertension seems to be due mainly to the suppression of the renin-angiotensin-aldosterone system in plasma. Renin is an enzyme endogenously synthesized by the kidneys and deposited in the bloodstream, where it converts angiotensinogen to angiotensin I, a relatively inactive decapeptide. TO angiotensin I is then converted to angiotensin II by the action of the enzyme converter of angiotensin, a peptidyl peptidase. Angiotensin II is a powerful vasoconstrictor, responsible for vasoconstriction and hypertension, as well as stimulation of the adrenal gland to secrete aldosterone. ACE inhibition decreases the plasma concentration of angiotensin II, which results in a decrease of vasopressor activity and in a reduction of aldosterone secretion. Although this last decrease is small, there may be slight increases in the serum potassium levels, along with sodium and fluid loss. The suppression of negative feedback of angiotensin II on renin secretion increases the plasma renin activity.

Another function of the converting enzyme is to degrade bradykinin, a powerful peptide. vasodepressor of the kinin group, in inactive metabolites. Therefore, the inhibition of ECA increases the activity of the circulating and local system of kallikrein-kinin, which contributes to peripheral vasodilation by activating the prostaglandin system. it's possible that this mechanism participates in the hypotensive effect of ACE inhibitors and is responsible for some adverse effects.

Treatment should be started with 5 mg once a day. The medicine has to be taken orally. If optimal control of blood pressure is not achieved after at least 3 weeks of treatment, the daily dose should be increased to 10 mg, which has been determined to be the most effective daily dose. However, in a small number of patients, it may be necessary to increase the dose daily at 20 mg (maximum recommended dose) or, preferably, consider treatment of combination with a diuretic. It has not been established whether hypertensive patients would benefit from a combination of imidapril with other antihypertensive treatments.

It is recommended to take the tablets at the same time of day, 15 minutes before meals, conditions for which efficacy has already been demonstrated.

The frequency of adverse reactions in hypertensive subjects was 34% with imidapril versus 36% with placebo.

The most common effects in the imidapril group were: cough, dizziness, fatigue/drowsiness, dyspepsia, and vomiting.

The unwanted effects observed during treatment with imidapril or other ACE inhibitors are as follows.

Decreases in hemoglobin, hematocrit, platelet, and leukocyte counts, as well as increases in liver enzymes, bilirubinemia, and creatine phosphokinase (CPK) levels have been reported in some patients. As imidapril decreases aldosterone secretion, an increase in serum potassium is possible. An increase in the level of urea in the blood and in serum creatinemia, reversible after stopping treatment, have been observed, particularly in the case of renal failure.

Severe hypotension is possible at the start of treatment or after increasing the dose, in certain risk groups. Hypotension may be accompanied by symptoms such as dizziness, a feeling of weakness, visual disturbances, and, rarely, disorders of consciousness (syncope). There have been some reports of tachycardia, palpitations, arrhythmia, angina, myocardial infarction, transient ischemic attack, and cerebral hemorrhage during hypotension while receiving ACE therapy.

ACE inhibitors have been shown to cause cough quite frequently. In rare cases, dyspnea, sinusitis, rhinitis, glossitis, bronchitis, bronchospasm, or angioedema (angioedema) of the upper respiratory tract and very rare cases of alveolitis / allergic pneumonia may be observed. eosinophils have been reported.

Intestinal angioedema has been reported rarely with symptoms of abdominal pain with or without nausea or vomiting.

In rare cases, allergy and hypersensitivity reactions such as rash, itching, rash, and urticaria have been reported. Undertreatment with ACE inhibitors, cases of erythema multiforme, Stevens-Johnson syndrome, toxic epidermal necrosis, psoriatic efflorescence, and alopecia have been reported. Skin signs may be accompanied by fever, myalgia, arthralgia, eosinophilia, and/or elevated levels of antinuclear antibodies. Like other ACE inhibitors, imidapril can induce angioedema (angioedema) that affects the face and oropharyngeal tissues.

You can buy Tanatril online through one of the UK’s leading online pharmacies, Pharmacy Planet. It's easy and convenient. You will need to fill out a short assessment and the item will be delivered directly to your door. If you want to buy these blood pressure tablets online, use Pharmacy Planet, a UK pharmacy you can trust.