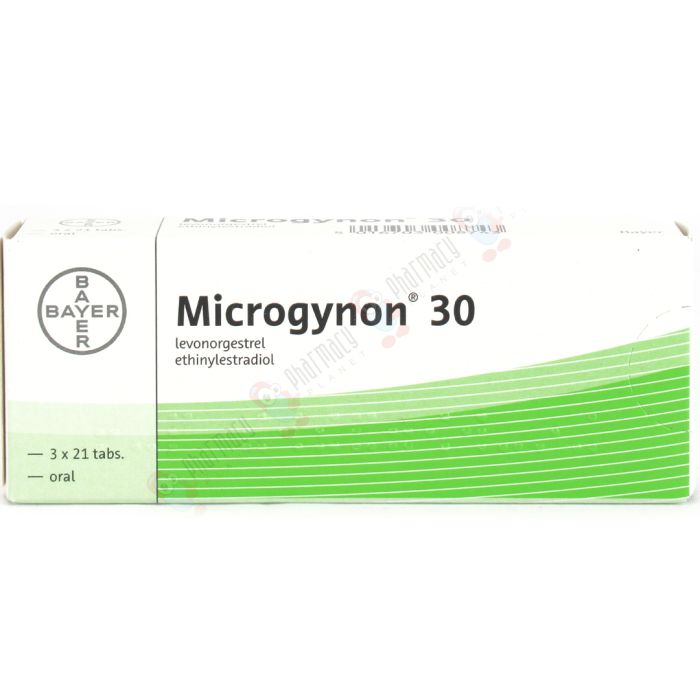 Microgynon 30 is a popular oral contraceptive. It contains two active ingredients, levonorgestrel and ethinyl estradiol that prevent ovulation from occurring during the menstrual cycle. Microgynon 30 contains a lower dose compared to most combined contraceptive pills. Microgynon ED has the same properties as Microgynon 30, except each pack has 28 tablets, meaning you take one every day without interval. The final seven tablets do not contain hormones. Every day contraceptives like this will get you in the routine of taking one pill each day, so that you will not forget to restart at the beginning of each cycle.

If you have been prescribed Microgynon 30, repeat supplies can be easily purchased online from our website following a simple medical questionnaire.

Microgynon is a combined oral hormonal contraceptive. It inhibits ovulation and produces changes in the cervical secretion (produced by the cervix). It is used to prevent pregnancy. Other indications for Microgynon are: dysmenorrhea (painful menstruation); endometriosis (appearance of endometrial tissue (tissue that lines the uterus) outside its usual location); ovulatory crisis (severe ovulation pain or breakthrough pain); adnexitis (inflammation of the tubes and ovaries) and ovarian rest (reduction or interruption of the activity of the ovary).

The contraceptive effect of COCs is based on the interaction of several factors. The most important are considered to be inhibition of ovulation and changes in cervical secretion. In addition to protecting against pregnancy, COCs have several positive properties that, along with negative properties, it may be helpful in deciding on the method of birth control. The cycle is more regular, menstruation is often less painful, and bleeding is less severe. The latter can lead to a reduction in the appearance of iron deficiency. Apart from this, there is evidence of a decreased risk of endometrial and ovarian cancer. Furthermore, higher-dose COCs (0.05 mg ethinyl estradiol) have been shown to reduce the incidence of ovarian cysts, pelvic inflammatory disease, benign breast disease, and ectopic pregnancy. Whether this can also be applied to lower-dose COCs remains to be confirmed.

Microgynon 30 (M30) is a birth control pill. It contains 150 mcg of levonorgestrel and 30 mcg of ethinyl estradiol. microgynon uses include being utilised as prevention against pregnancy and is prescribed by the doctor.

Follow exactly the instructions for the administration of Microgynon indicated by your doctor. If in doubt, consult your doctor again.

Remember to take your medicine, as forgetting coated tablets may decrease the effectiveness of the preparation. Combination oral contraceptives, when the recommended microgynon dosage is taken correctly, have an error rate of about 1% per year. The error rate may increase if tablets are forgotten or incorrectly taken.

The first tablet is drawn from one of the boxes marked with the corresponding day of the week. The tablets should be taken every day at approximately the same time, with a little liquid if necessary and in the order indicated on the blister pack. One tablet will be taken daily for 21 consecutive days. A new pack will be started after an interval of 7 days without taking tablets, during which withdrawal bleeding usually occurs (period). Bleeding from deprivation, similar to the rule, will appear two to three days after taking the last tablet, and may not have finished before starting the next pack.

Like all medicines, Microgynon 30 tablets can cause side effects, although not everybody gets them. If you experience any side effects, especially if they are severe and persistent, or if you have any health change that you think may be due to Microgynon, see your doctor.

You can buy Microgynon online through one of the UK’s leading online pharmacies, Pharmacy Planet. It's easy and convenient. You will need to fill out a short assessment and the item will be delivered directly to your door. If you want to buy these Oral Contraceptive Pills online, use Pharmacy Planet, a UK pharmacy you can trust.