the items you wish
to order

by our qualified
prescriber

Please use the options provided to make your final selection. 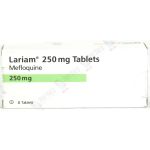 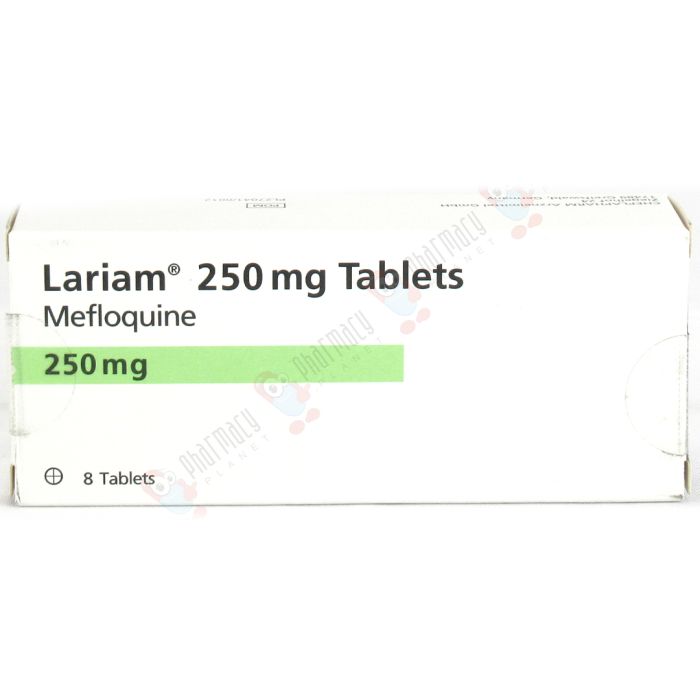 Lariam is an effective malaria treatment and preventative. It available as a tablet and is taken once a week. Treatment begins prior to travel, continues throughout your trip and should be taken for four weeks after your return. It is important that you continue to take the tablets post-travel, to cover the disease’s incubation period.

Lariam is a branded medication manufactured by Roche and is available from our UK-based pharmacy. It contains mefloquine hydrochloride, which targets the parasite and stops it from reproducing. This product is adept at tackling the parasites present in regions where malaria has developed an immunity to other antimalarials, such as chloroquine. It also treats active malarial strains, but this needs to be done under a doctor’s supervision.

Malaria is caused by the plasmodium parasite carried by mosquitoes and is transferred to humans through bites. Symptoms can take three months to develop after infection, or even longer in some cases. These include fever, flu-like signs and headache. Some, aggressive strains may cause organ failure and death, so it is important to take precautions.

Lariam malaria tablets is a medicinal drug that is used for the prevention or chemoprophylaxis of Malaria or Malaria (disease due to a parasite transmitted by a mosquito bite). Its active component is Mefloquine, which is similar to Quinine. It is the medicine of choice recommended for certain areas of the world where other drugs to prevent malaria may be less effective as they are the parasite most resistant to them.

It can also be used as an emergency treatment when symptoms of Malaria appear such as fever, chills, and tremors if not used as prevention.

These anti-malarial tablets act on the asexual intraerythrocytic forms of malarial parasites that affect humans: Plasmodium falciparum, P. vivax, P. malariae, and P. ovale. It is also effective against malaria parasites that are resistant to other antimalarials (chloroquine, proguanil, pyrimethamine, and pyrimethamine combinations).

Lariam protects against and treats malaria. Malaria is transmitted through the bite of a mosquito infected with the malaria parasite. Much of the mosquitoes in the tropics are infected with this parasite. When it is infected, parasites nest in the liver. As they are adults, a part of the parasite enters the red cells destroying them. This causes fever. The parasites left in the liver can cause another attack of malaria a few weeks or months later. Lariam kills the malaria parasite and is prescribed when she goes to visit the tropics.

For ADULT PREVENTION: Recommended dose: 1 weekly tablet (250 mg of Mefloquine per week) beginning at least one week before entering the risk zone, continuing during the stay in the same and extending up to 4 weeks after leaving the said area.

For other medications, it may be advisable to start 2-3 weeks earlier to ensure tolerance of the medication.

For PREVENTION in CHILDREN: It is not recommended in children under 3 months or weighing less than 5 kilos. Always consult your pediatrician. The dose will vary according to body weight (5 mg / Kg weight) and the age of the boy. weekly dose: a quarter of a tablet for 10-20 kilos; half compressed for 20-30 kilos; three tablet quarters for 31-45 kilos. It must be started at least one week before entering the risk, continue during the stay in the same, and extend up to 4 weeks after leaving the area.

Each dose of Lariam (Mefloquine) will be taken preferably after the main meal and with a full glass of water (mineral if drinking water is not guaranteed).

It is important for both adults and children not to miss a dose of this medicine and to follow regular dosing (eg the same day of the week). If a dose is missed, it should be administered as soon as possible; but it will not be taken if the next dose is not long. A dose should never be doubled. Overdose of antimalarial drugs can be very serious.

Talk to your doctor as soon as possible if you experience any of the following: suicidal thoughts or self-threatening behaviors; allergic reaction; Severe changes in the texture and appearance of the skin, mouth, and eyes; psychosis; anxiety; depression; panic attacks; fits; Pneumonitis; Severe liver problems; Pins and needles or coordination problems; Or blood disorders or insomnia.

You should also tell your doctor if you develop: feelings of mistrust towards others; Hallucinations; humor changes; Or heart problems. Other Lariam tablets side effects include the following:

Do not use Lariam if you have a history of the following: depression; Any other mental illness; fits; Severe liver problems; Or black fever. It may also not be right for you if you have or have ever had: epilepsy; Heart problems; Liver or kidney dysfunction; Eye problems; An abnormal blood test; Problems with the sensations in your hands and feet; Or pneumonitis.

Concomitant administration of Lariam with other related substances (for example quinine, quinidine, chloroquine) can cause electrocardiographic abnormalities and increase the risk of seizures. It has been shown that the use of halofantrine during Lariam administration as chemoprophylaxis for Malaria treatment or 15 weeks after the last dose of Lariam considerably prolongs the QTc interval. Considering the increase in plasma concentration and the half-life of elimination of mefloquine after co-administration with ketoconazole, the risk of QTc interval prolongation may also exist if ketoconazole is taken during administration of Lariam as chemoprophylaxis or treatment of malaria or within 15 weeks after the last dose of Lariam. With mefloquine alone, no clinical prolongation has been observed. significant of the QTc interval. This appears to be the only such interaction with Lariam of clinical importance, although in theory the concomitant administration of other drugs that alter cardiac conduction could also lengthen the QTc interval.

You can buy Lariam online through one of the UK’s leading online pharmacies, Pharmacy Planet. It's easy and convenient. You will need to fill out a short assessment and the item will be delivered directly to your door. If you want to buy Lariam 250mg tablets online, use Pharmacy Planet, a UK pharmacy you can trust.