Lixiana is indicated for the prevention of stroke and systemic embolism in adult patients with nonvalvular atrial fibrillation (NVAF) with ...

Lixiana is indicated for the prevention of stroke and systemic embolism in adult patients with nonvalvular atrial fibrillation (NVAF) with one or more risk factors such as congestive heart failure, hypertension, age ≥ 75 years, diabetes mellitus, stroke or attack Transient ischemic disease (TIA). Lixiana is indicated for the treatment of deep vein thrombosis (DVT) and pulmonary embolism (PD), and for the prevention of recurrences of DVT and PD in adults. The recommended dose is one 60 mg tablet once a day. 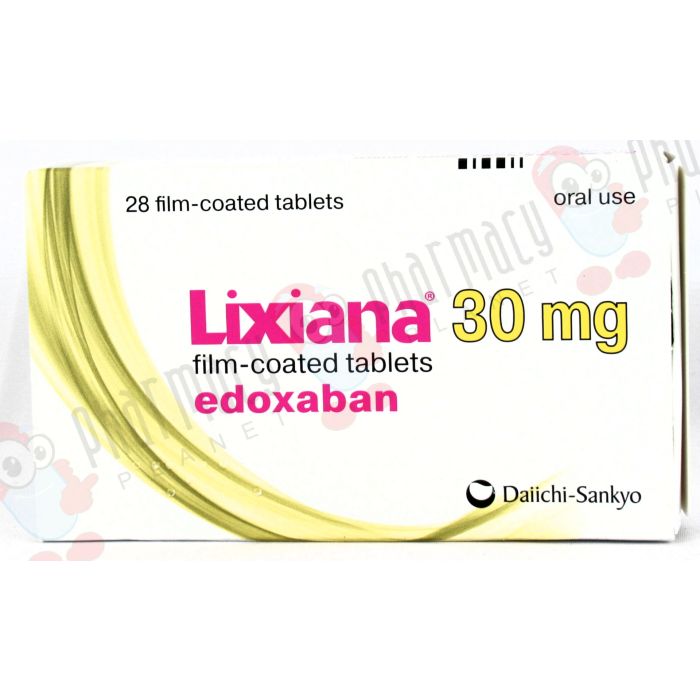 Lixiana contains the active substance edoxaban and belongs to a group of medicines called anticoagulants. This medication helps prevent the formation of blood clots.

Lixiana contains the active substance edoxaban and belongs to a group of medicines called anticoagulants. This medication helps prevent the formation of blood clots. It works by blocking the activity of factor Xa, an important element of blood clotting.

Lixiana is used in adults:

The recommended dose is one 60 mg tablet once a day.

If your doctor has prescribed medicines known as P-GP inhibitors: cyclosporine, dronedarone, erythromycin, or ketoconazole, the recommended dose is one 30 mg tablet once a day.

How to take the tablet

Swallow the tablet, preferably with water. Lixiana can be taken with or without food.

Like all medicines, these CV Antiplatelet Tablets can cause side effects, although not everybody gets them.

Like other similar medicines (medicines to reduce blood clotting), Lixiana can cause bleeding, which can be life-threatening. In some cases, the bleeding may not be evident.

If you experience a bleeding episode that does not stop on its own or if you experience signs of excessive bleeding (exceptional weakness, tiredness, paleness, dizziness, headache, or unexplained swelling), see your doctor immediately.

Your doctor will decide whether to keep you under closer observation or to change your treatment.

Edoxaban 15 mg is not indicated as monotherapy as it may lead to decreased efficacy. It is only indicated in the process of switching from edoxaban 30 mg to AVK, together with an appropriate dose of AVK.

Edoxaban increases the risk of bleeding and can cause serious life-threatening bleeding. Like other anticoagulants, edoxaban is recommended to be used with caution in patients with an increased risk of bleeding. Edoxaban administration should be discontinued if severe bleeding occurs.

Several subgroups of patients, as explained below, are at increased risk of bleeding. These patients should be carefully monitored for signs and symptoms of bleeding complications and anemia after initiation of treatment. Any unexplained decrease in hemoglobin levels or blood pressure will require finding a bleeding area.

You can buy Lixiana Tablets online through one of the UK’s leading online pharmacies, Pharmacy Planet. It's easy and convenient. You will need to fill out a short assessment and the item will be delivered directly to your door. If you want to buy this CV Antiplatelet medication online, use Pharmacy Planet, a UK pharmacy you can trust.