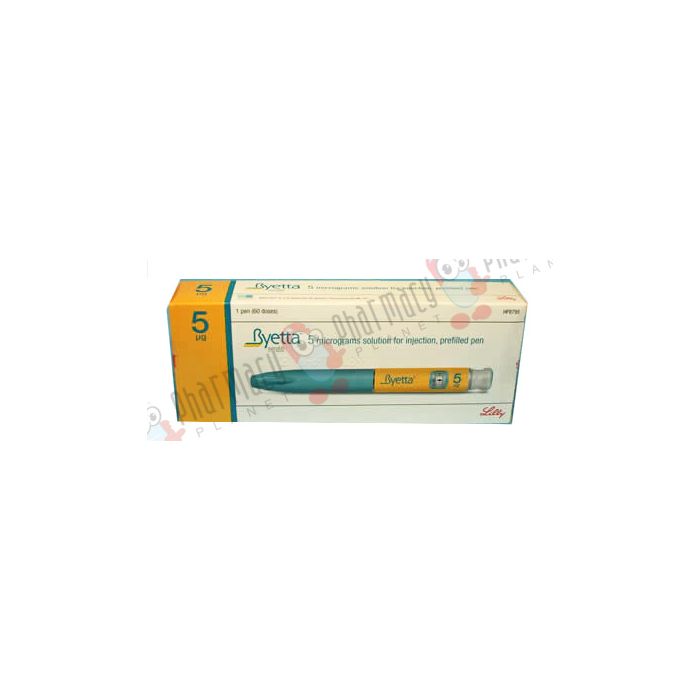 Exenatide is a glucagon-like peptide-1 receptor agonist (GLP-1) that exhibits several anti-hyperglycemic actions of glucagon-like peptide-1 (GLP-1). The amino acid sequence of exenatide partially overlaps that of human GLP-1. Exenatide has been shown to bind and activate the known human GLP-1 receptor in vitro, its mechanism of action being mediated by cyclic AMP and/or other intracellular signaling pathways.

Exenatide increases glucose-dependent insulin secretion from the beta cells of the pancreas. As the blood glucose concentration decreases, insulin secretion returns to normal. When exenatide was used in combination with metformin alone, no increase in the incidence of hypoglycemia was observed compared to placebo in combination with metformin that could be due to this glucose-dependent insulinotropic mechanism.

Exenatide suppresses glucagon secretion, which is known to be abnormally elevated in type 2 diabetes. Low concentrations of glucagon lead to decreased hepatic glucose production. However, exenatide does not affect the normal response of glucagon or other hormones to hypoglycemia.

Exenatide slows gastric emptying and therefore reduces the rate at which glucose derived from food appears in the circulation.

Byetta is used with other diabetes medicines, called metformin, sulfonylureas, thiazolidinediones, and basal or long-acting insulin. Your doctor has prescribed Byetta as an additional medicine that helps you control your blood sugar. Continue with your exercise and eating plan. The medicine in Byetta helps your body increase insulin production when your blood sugar is high.

If you are over 70 years old or have kidney problems, it may take more than 30 days for you to tolerate the dose of Byetta 5 micrograms, so your doctor may not increase your dose.

An injection from your pre-filled pen will give you your dose. Do not change your dose unless your doctor tells you to.

You should inject this medication at any time within 60 minutes (1 hour) before breakfast and dinner, or before your two main meals of the day, which should be about 6 hours or more apart. Do not use this medicine after meals.

You should inject this medication under the skin (subcutaneous injection) into the upper leg (thigh), stomach area (abdomen), or upper arm. If you are using Byetta and insulin, you must inject them separately.

Treatment with immediate-release exenatide (Byetta) should be started with a 5 μg dose of exenatide administered twice daily for at least one month in order to improve tolerability. The exenatide dose can then be increased to 10 μg twice daily to further improve glycemic control. Doses greater than 10 μg twice a day are not recommended.

Immediate-release exenatide is available as a pre-filled pen with 5 µg or 10 µg doses of exenatide.

The immediate-release exenatide dose does not need to be adjusted daily based on self-monitoring of glucose levels. Blood glucose self-tests are required to adjust the dose of sulfonylurea or insulin, particularly when treatment with Byetta is started and insulin is reduced. A gradual reduction in insulin dose is recommended.

Rarely (may affect 1 in 1,000 people), severe allergic reactions (anaphylaxis) have been reported.

You should consult your doctor immediately if you develop symptoms such as:

Cases of inflammation of the pancreas (pancreatitis) have been reported (frequency not known) in patients receiving this drug. Pancreatitis can be a serious, life-threatening medical situation.

Check with your doctor if you have had pancreatitis, gallstones, alcoholism, or very high triglycerides. These medical situations may increase the chance of getting pancreatitis, or getting it again, whether or not you are taking this medication.

STOP taking this medication and contact your doctor immediately if you have severe and persistent stomach pain, with or without vomiting, because you could have an inflamed pancreas (pancreatitis).

Very common side effects (may affect more than 1 in 10 people):

Common side effects (may affect up to 1 in 10 people):

Uncommon side effects (may affect up to 1 in 100 people):

You can buy Byetta Exenatide Injection online through one of the UK’s leading online pharmacies, Pharmacy Planet. It's easy and convenient. You will need to fill out a short assessment and the item will be delivered directly to your door. If you want to buy Diabetes Injections online, use Pharmacy Planet, a UK pharmacy you can trust.